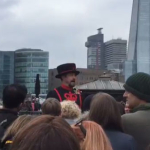 Take in the sights and sounds of the TFMS London Study Tour! In March 2015, film/media studies student and tour participant Dylan Cope (’15) shot this short film of his London experiences on his iPhone 6. Enjoy the tour! Visit the London Study Tour site

Much Ado About Nothing
October-November 2014