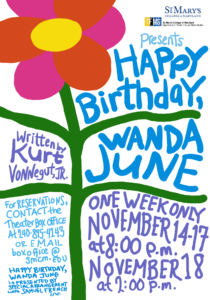 “This is a simple-minded play about men who enjoy killing, and those who don’t.” So opens Kurt Vonnegut, Jr.’s prescient riff on toxic masculinity, as seen through the lens of late-1960s America. Big-game hunter and war hero Harold Ryan, presumed dead for many years, returns home like Odysseus to an America he no longer recognizes and a wife, Penelope, who’s started a new life.

During the war, Harold killed over 200 men and women, including the notorious Beast of Yugoslavia, and countless more animals, for sport. He was later “lost” in the Amazon rainforest while hunting for diamonds with Colonel Looseleaf Harper, a slow-witted aviation hero, who had the unhappy task of dropping the atomic bomb on Nagasaki, an act he comes to regret.

Confronted on his unexpected return by two suitors for his wife, a nerdy Electrolux vacuum cleaner salesman named Shuttle and a hippie, peace-loving M.D. called Woodly, who later becomes his foe, Harold is aggrieved that his country has become weak. He even finds his son, Paul, who had worshipped his father from afar as a real American hero, has been pampered and grown unmanly, afraid even to walk the park at night.

Harold Ryan, the prolific killing machine, believes all heroes have been replaced by intolerable pacifists, and that in postwar 1960s America, it’s his job to Make America Great Again. This is the story of his tragic attempt to do so.