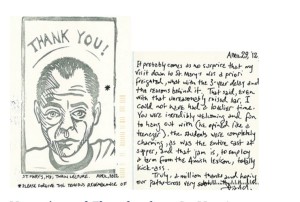 David Rakoff, the 2012 Annual Twain Lecture speaker, passed away on August 9, 2012. Rakoff (as he liked to be called) overcame what he referred to as “a touch of cancer” in his twenties, but he faced cancer again in 2010 when a malignant tumor was found in his left shoulder. This second diagnosis came at the same time that the Twain Lecture Series first invited Rakoff to St. Mary’s College. He was unable to attend at that time, but we are grateful that he was able to take part in the Lecture Series in 2012. The Twain Lecture was Rakoff’s last major performance.

Although Rakoff spoke and wrote of the value of “defensive pessimism,” or imagining the worst case scenario so as to be better prepared to handle it, he always maintained a sense of humor about even the darkest of subjects. As Rakoff tells Jon Stewart in this October 2010 Daily Show clip, “The long-term mortality of people with lousy attitudes is no different than people with great attitudes. So, you can be the worst bastard on the ward, and you will not die at any greater rate than the other people. People will simply be gladder when you do.” Having met and hosted David Rakoff, we know into which category he falls, and we could not be sadder to know he is gone. Our thoughts are with his family and friends.

David Rakoff’s 2012 Twain Lecture coincided with the first year of the annual “Assault of Laughter” Writing Contest, and we have decided to nickname the award for this contest “The Rakoff Award” in his honor. Rakoff was also the first Twain Lecture guest to receive cookies from the Twain Lecture Research Fellow along with his other welcome basket gifts. The box of cookies was only half full as a nod to his latest book Half Empty. To remember Rakoff, all future Twain Lecture speakers will receive a half empty box of cookies, along with a note asking that they please remember the humorist for whom this tradition was started.

“The day after I heard the news of David’s having shuffled off, I opened my copy of Didion’s Slouching Towards Bethlehem, and read the title essay, as David had recommended to us all at his talk.

Taking orders from the dead can be enriching. (And not crazy, it turns out.)” –Michael Taber