In 2016, this NSF grant funded 12 students from around the country (three from St. Mary’s) to work with four Research Mentors on various mathematical and computer science related projects. According to Dr. Ganzell, “these 12 students were selected from over 100 applicants and worked hard this summer, learning various mathematical and programming skills and ideas from their collaborative efforts, their mentors, a regular seminar, and lots of guest lecturers.”

Dr. Ganzell and Dr. Douglas’s award builds upon an 11-year success record of the Emerging Scholars Programs at St. Mary’s. One of the main goals of the grant is to encourage early-career students from under-represented groups to pursue careers in mathematics, computer science, or more broadly, another Science, Technology, Engineering and Mathematics (STEM) field. While this REU is not restricted to female participants, all twelve of this year’s students are women, who remain an under-represented group in STEM and mathematics according to NSF statistics.

This year’s research mentors and projects included the following:

1) Dr. Katherine Socha. Katherine worked as an Associate Professor of Mathematics at St. Mary’s, earning national awards for her writing and teaching. Katherine co-founded the Emerging Scholars Program at St. Mary’s with Professor of Mathematics Dave Kung. Since 2009, Katherine has gone on to work at NSF, with Math for America, and currently works at the Park School of Baltimore. The St. Mary’s community was thrilled to have her back, even if it was only for seven short weeks.

Katherine advised a four-student group in an area of mathematics called “Modeling.” Natasha Pillai, Devon Yee, Mary Korendyke, and Alex Schoen developed and studied different mathematical models to answer a very tricky and important question: where should oyster reefs be placed in the Chesapeake Bay? 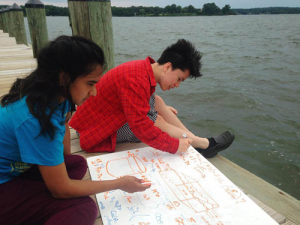 Two students work on their project at the St. Mary’s Waterfront

A student participating in the modeling group submitted the following quote after the project ended:

It’s been a blast spending the last 6 weeks researching with these wonderful human beings! I’ve learned a lot of math, and had an amazing time doing so; I’m so thankful to have made so many wonderful friendships…Math is cool!

2) Dr. Sandy Ganzell. Sandy is a Professor of Mathematics here at St. Mary’s and has extensive experience collaborating with undergraduates on cutting edge research in an area of mathematics called “Knot Theory.” This subject deals with mathematical loops of string that are “knotted up” in complicated ways (much like everyone’s iPod earbuds), and features a number of important, fundamental questions. For example, how hard is it to determine if two complicated knots are, in fact, knotted in the exact same way? That is, how difficult is it to distinguish two knots?

Sandy worked with Kaitlin Tademy, Griffin Walker, Janet Huffman, and Leslie Mavrakis during this program, and the five researchers developed a new way to generalize one answer to the above question. Whereas the Jones Polynomial can be used to distinguish two knots, the group spent their seven weeks developing a tool that can distinguish more general objects, called “un-oriented links.” 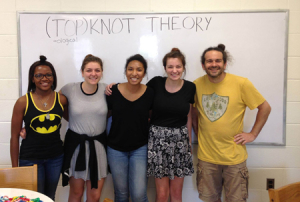 A student participating in the knot theory group submitted the following quote after the project ended:

I really liked how unique the project was, we felt like we discovered something. I loved that we were researching something that I knew nothing about before starting the REU. It’s awesome to be able to go back home and have an understanding of knot theory!

3) Drs. Alan and Lindsay Jamieson. Alan and Lindsay are Associate Professors of Computer Science here at St. Mary’s, and their work and successes with undergraduate research is nationally recognized. Alan received a National Center for Women & Information Technology Undergraduate Research Mentoring Award in 2014 and both Alan and Lindsay are regular participants at the annual Grace Hopper Celebration of Women in Computing conference, which is the world’s largest gathering of women technologists.

This summer they advised a research group on an important and recent concept developed by computer scientists at Clemson University. Their students — Sonia Moreno, Monique Roman, Cyrin Geluz, and Madison Jones — explored the idea of “influence numbers” for certain types of graphs. Graph theory features a variety of applications, and the work they’ve done might be of use to sociologists and entrepreneurs interested in social media. In fact, our very own St. Mary’s library is interested in using their work to optimize current signage! 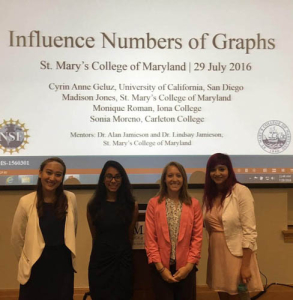 A student participating in the graph theory group submitted the following quote after the project ended:

I was really forced to think outside the box and approach problems in new, creative ways. In short, I loved being able to express my creativity in math.

All twelve students attended a biweekly seminar where they discussed various topics in mathematics, coding, and career preparation. Finally, the entire program was delighted to host two special visitors one week: Park School of Baltimore’s rising sophomore Kendall Clark and her mother spent some time with the group in July, learning about mathematics and sharing a new-found excitement for it. 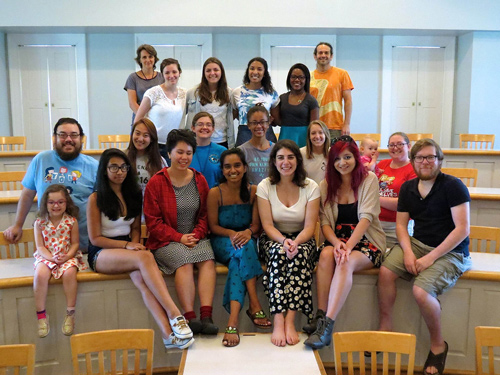 A participating student submitted the following quote after the project ended:

I really enjoyed this experience. I loved the campus. It was beautiful, and the energy and atmosphere were just so welcoming and supportive. I loved the food! But primarily, I love the wonderful women I met and the supportive advisors. They made a lasting impact on me, and I know in my heart that the eleven other women I spent the last two months with were not just an experience. We created meaningful relationships that were built to last. I’ll never forget this experience and what it taught me about friendship, courage, myself, and of course MATH!