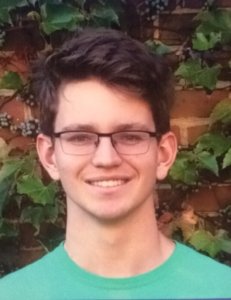 Continuing the tradition of seeking summer research opportunities, another group of students have applied to the Summer Undergraduate Research Fellowship (SURF) program at the National Institute of Standards and Technology (NIST) for summer 2018. NIST is one of the nation’s premiere research institutions for the physical and engineering sciences. The first student to be selected is Peter Orban, a St. Mary’s College of Maryland (SMCM) sophomore, with a double major in mathematics and physics. Peter will work with the Physical Measurement Lab in Gaithersburg, MD, measuring radioactivity with ionization chambers. He enjoys the intersectionality between math, physics, and statistical processing, and hopes to gain experience in research and computer programming. A high-achieving student and Division III swimmer, Peter has made Dean’s List and earned the Capital Athletic Conference All-Academic Team Award, as well as the Capital Athletic Conference Men’s Swimming Weekly Honor Roll Award. He plans to pursue a Ph.D. in either math, physics, or engineering. Peter is one of the many SMCM students developing their research skills through summer research programs.

Music has always been a means of salvation. This can be seen in a recently completed project, “From Slavery to Freedom in St. Mary’s City: Engaging History to Strengthen Democracy with Jazz”. Created by Professor of Philosophy Sybol Anderson and Professor of English Jeff Coleman, this project served to promote the intersectionality between democracy, creative expression, and slavery in southern Maryland. The project was supported by the Maryland Humanities Council, and engaged community members of all ages and backgrounds in historical, cultural, and philosophical reflection on the meaning of slavery in St. Mary’s City and beyond. Participants explored how African-Americans liberated themselves from oppression by “improvising” methods of “physical” escape from slavery and of spiritual escape in jazz; and how through engaging this history, one can liberate themselves for an inclusive democracy. The multi-disciplinary project intentionally varied both it’s engagement medium (symposiums, lectures, and workshops) and it’s content (archaeological finds, jazz concerts, and spoken-word performances).

Program events included a symposium held on September 23rd, 2017 at which St. Mary’s College of Maryland (SMCM) faculty, students, and visiting scholars shared with the general public information about the discovery of archaeological evidence that St. Mary’s Female Seminary owned slaves in the 19th century. Discussions highlighted narratives about those enslaved people and slavery in Maryland. For democracy to flourish, the truth about slavery in Maryland has to be uncovered and recognized, allowing for healing, inspiration, and understanding.

Workshops entitled “Improvisation, Self-Emancipation, and Democratic Participation,” were held in October and November 2017. Through historical study, philosophical reflection, and improvisational activities, participants explored the themes of improvisation, innovation, and freedom linking jazz and democracy. They learned how jazz stimulates free thought and expression and how to employ jazz concepts in daily life to nurture democratic listening and practice.

Along with the symposium and workshops was a lecture and performance titled “The Spirit of Jazz and Democracy.”  The opening lecture was part of the aforementioned symposium that illuminated jazz as the embodiment of democracy and traced it from slavery to innovations by Maryland jazz artists such as Billie Holiday to its use by the US government to promote ideas of American democracy globally. The closing lecture and performance on December 8th, 2017, featured workshop participants’ reflections on the connections between jazz and democracy.

Exploring the local African-American narrative and its connection to liberation and democracy through jazz was a profound research approach. This project was able to unite scholars from varied disciplines, as well as students and local SMCM community members, thus succeeding in the goal of bring SMCM closer together, engaging with the past for a better, more democratic, future.

Anthropology is a very diverse discipline which can be applied to solve a variety of questions or problems. This could be seen at the recent University of Maryland Anthroplus Conference which brought students together to present on modern applications of anthropology. With support from the St. Mary’s College of Maryland (SMCM) Anthropology Department, three SMCM students were selected as the only undergraduates to present their research at this graduate student conference. The conference was separated into three thematic segments: How We Are Where We Are: Places, Spaces & Belonging, How We Are Known: Bodies, Minds, and Identities, and How We Do What We Do: Contemporary Archaeological Methods. Each SMCM student presented on one of the thematic approaches at this conference. 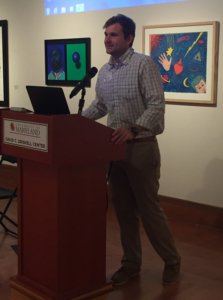 The first student to present was Patrick Martin, a Senior, majoring in Anthropology with a focus in conflict studies. Under the thematic group Places, Spaces & Belonging, Patrick presented his Senior Tutorial research on conflict in the Democratic Republic of the Congo (DRC). His project was titled Corruption, Conflict, and the Congolese: Proposing a New Model for Conflict Analysis in the DRC. Synthesizing past ethnographies, news reports, and statistical data on the occurrence of violence among individuals, he proposed a new model for socio-economic causes of continued conflict within the Congo. Citing the creation of informal economies due to lack of infrastructure, groups use ethnic identity and violence to regain agency and survive. Patrick hopes to continue his research and apply his model to other conflicts, as well as investigate ways to find peace. 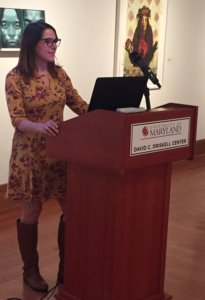 Next to present was Rita Druffner, a Senior, with a double major in Anthropology and Psychology. Under the theme Bodies, Minds, and Identities, Rita presented her current St. Mary’s Project on the Anthropology of Autism. With the increase of people diagnosed with autism, this project analyzed autistic identity, through societies lens, as well as the lens of diagnosed individuals. Rita interviewed individuals diagnosed with autism from the St. Mary’s community to collect ethnographic data and create a life history. She reviewed how autism is diagnosed by the Psychiatric community, as well as how autism is portrayed and viewed in society. She concludes that autism creates a unique identity for each individual, not defining them, but becoming one of the many aspects of who they are as a person. 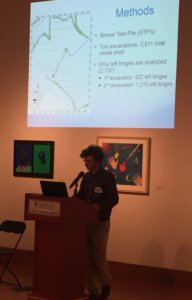 The final SMCM student to present was Matthew Borden, a Junior and Anthropology major. Presenting on Contemporary Archaeological Methods, Matthew showcased his investigation into the relevance of oyster shells found at Lower Brambly, a Native American archeological site in St. Mary’s County. First conducting an archeological dig in collaboration with SMCM Professor of Archaeology Julie King, Matthew focused on the size, placement, and quantity of oyster shells found in Lower Brambly. He hypothesized that the increased size of these shells meant a smaller Native American population, allowing oysters to grow larger. Matthew tested his hypothesis by measuring, classifying, and comparing, shells found through shovel test pits. He compared oyster shell size characteristics with documented local historical demographics and found that as population size grew, smaller and smaller oyster shells were present. Matthew also speculated that the largest oyster shells would be found at locations where higher status people lived . Much information can be gained through studying the distribution and characteristics of oyster shells and this knowledge can be applied to other archeological work in the region.

All three presenters offered their unique take on how anthropology can be applied in the twenty-first century. Representing SMCM as the only undergraduates students among graduate students from other colleges, these students took the opportunity to showcase their research to a wider community.

Although a liberal arts college, St. Mary’s College of Maryland (SMCM) has a unique connection with STEM majors. Two SMCM students, Rose Young and Elizabeth Mulvey, are conducting research on women of color in STEM programs at academic institutions. There have been many inclusivity issues with regards to women in STEM fields, especially women of color. This research hopes to uncover factors that promote the success of these women in STEM programs. Under the guidance of Professor of Educational Studies Angela Johnson, these two high-achieving students are using the Integrated Postsecondary Education Data System (IPEDS) to compare the inclusivity and success of women of color across college campuses. IPEDS shows statistical data on student demographics across a number of different campuses. They will use this information, cross-referenced with other variables to see how factors including institution diversity, support networks, and teacher-to-student ratio affect women of color in STEM. This work is supported by the National Science Foundation, via a Eureka Scientific, Inc. subaward to Dr. Johnson.

Along with these demographic figures, Rose and Elizabeth are also collecting ethnographic data and conducting interviews among women of color in STEM. They have attended a number of STEM focused conferences and events to collect this interview data. Both hope to better the success rate of women in STEM and find steps that colleges can take to better the student experience. This research is also being conducted with a sister school in England. 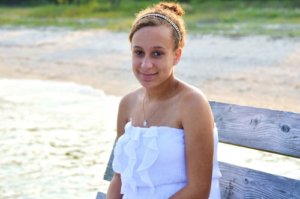 Both students showcase the St. Mary’s Way in the research that they are conducting. Rose Young is a sophomore, studying Math and Physics. Rose believes that due to SMCM’s small size, teacher interaction, and accepting culture, women in STEM fields succeed here. Also, during her interviews she found that the presence of updated collaboration rooms and group-focused STEM clubs on academic institutions increase the likelihood of student success. While working on this project, Rose is gaining experience in data analytics and interview skills, as well as a new appreciation for math. Rose wants to continue developing her research skills and pursue a career in Nuclear Engineering.

Elizabeth Mulvey is also a sophomore studying Physics, with a double minor in Education and English. With a past internship at NASA, Elizabeth is glad to gain experience in data entry and conducting anthropological interviews. She also enjoys being able to travel to different academic events and meet other like-minded women in STEM programs. Elizabeth hopes to shed more light on race and diversity issues associated with women of color in STEM programs at different colleges. She sees the potential moral applications of STEM in education and how it’s taught to people of color and different genders.

Both students will continue this research project into the Fall 2018 semester, including traveling to the sister school in England to compare data. Rose and Elizabeth are two of many SMCM students that are building a better future through sponsored research.