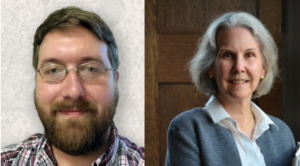 Professor of Anthropology Julia King and adjunct instructor of anthropology Scott Strickland ’08 are featured along with Chief Anne Richardson of the Rappahannock Tribe in the January/February edition of Archaeology Magazine. The article, “Return to the River,” focuses on their work tracing the history and development of the Rappahannock Indians in early American history. The anthropology department at St. Mary’s College first began studying the Rappahannock River valley’s history in 2016 at the request of the National Park Service Chesapeake Bay Office and the Chesapeake Conservancy. The work was undertaken to provide interpretive support for the Captain John Smith Chesapeake National Historic Trail and led to the Rappahannock Indians’ return to the river when former Senator John Warner and his daughter, Virginia Warner, donated land to the Rappahannock in their ancestral homeland. The survey of the greater river valley has been funded by the National Endowment for the Humanities and the U.S. Fish and Wildlife Service.