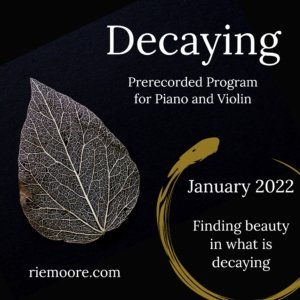 SMCM alumna and adjunct instructor Rie Moore ’19 was recently awarded a Creativity Grant from the Maryland State Arts Council (MSAC) for her project titled “Decaying”. The funding will cover expenses associated with creating a prerecorded audio-visual program for piano and violin on the theme of finding beauty in what is decaying. The filmed program will be made available virtually to the public for free via Moore’s YouTube channel as well as embedded on her website.

Inspired by her experience at the Piano Festival by the River at SMCM, Moore began studying with Brian Ganz, a member of the piano faculty at the College, which eventually led to completing a degree in music through SMCM’s second bachelor’s degree program in 2019. She was awarded Alice Fleury Zamanakos and Arthur S. Zamanakos Prize in Music upon graduation. In 2020, she received the Regional Independent Artist Award from Maryland State Arts Council for her program “As if heard from within” and was selected as one of the 48 competitors to perform at the Cliburn International Amateur Piano Competition in 2022. Her latest project “Beyond Darkness”, a prerecorded program sponsored by St. Mary’s County Arts Council, was made available online in March 2021.

In “Decaying”, Moore will explore beauty in what is decaying in a setting that communicates the theme through effective filming to reach audience members in a way that is different from the standard recital experience. Her desire to pursue the theme of finding beauty in what is decaying stems from her Japanese heritage as well as a wish to create a space that invites audience members to appreciate beauty beneath the surface and the process and journey of our living. The 45-minute program consists of pieces for piano and violin and poetry reading, categorized into three sections: Scenery, Thoughts, and Physical Existence. Prior to the premiere of the program, Moore will launch “Project Decaying”, an initiative to invite artwork that expresses beauty in what is decaying from the community to create a space for contemplation on the theme as part of the community engagement.

The following collaborators will participate in essential program components:

Moore hopes to generate interest for her project during a TED talk titled “More Than Music: A New Approach to Concert Programming” at TEDxGreatMills on September 18, 2021. 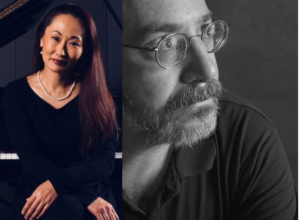 St. Mary’s College alumna Rie Moore ’19 and Professor of Music David Froom have each been awarded Maryland Individual Artist Awards. They were among the 50 award winners (the only two from St. Mary’s County) chosen from more than 250 applicants. Moore was awarded for “promise and innovation” in piano performance, Froom for “notable artistic achievement” in musical composition.

The full press release from the Maryland State Arts Council can be found here.

The full list of this year’s awardees can be found here.

Music has always been a means of salvation. This can be seen in a recently completed project, “From Slavery to Freedom in St. Mary’s City: Engaging History to Strengthen Democracy with Jazz”. Created by Professor of Philosophy Sybol Anderson and Professor of English Jeff Coleman, this project served to promote the intersectionality between democracy, creative expression, and slavery in southern Maryland. The project was supported by the Maryland Humanities Council, and engaged community members of all ages and backgrounds in historical, cultural, and philosophical reflection on the meaning of slavery in St. Mary’s City and beyond. Participants explored how African-Americans liberated themselves from oppression by “improvising” methods of “physical” escape from slavery and of spiritual escape in jazz; and how through engaging this history, one can liberate themselves for an inclusive democracy. The multi-disciplinary project intentionally varied both it’s engagement medium (symposiums, lectures, and workshops) and it’s content (archaeological finds, jazz concerts, and spoken-word performances).

Program events included a symposium held on September 23rd, 2017 at which St. Mary’s College of Maryland (SMCM) faculty, students, and visiting scholars shared with the general public information about the discovery of archaeological evidence that St. Mary’s Female Seminary owned slaves in the 19th century. Discussions highlighted narratives about those enslaved people and slavery in Maryland. For democracy to flourish, the truth about slavery in Maryland has to be uncovered and recognized, allowing for healing, inspiration, and understanding.

Workshops entitled “Improvisation, Self-Emancipation, and Democratic Participation,” were held in October and November 2017. Through historical study, philosophical reflection, and improvisational activities, participants explored the themes of improvisation, innovation, and freedom linking jazz and democracy. They learned how jazz stimulates free thought and expression and how to employ jazz concepts in daily life to nurture democratic listening and practice.

Along with the symposium and workshops was a lecture and performance titled “The Spirit of Jazz and Democracy.”  The opening lecture was part of the aforementioned symposium that illuminated jazz as the embodiment of democracy and traced it from slavery to innovations by Maryland jazz artists such as Billie Holiday to its use by the US government to promote ideas of American democracy globally. The closing lecture and performance on December 8th, 2017, featured workshop participants’ reflections on the connections between jazz and democracy.

Exploring the local African-American narrative and its connection to liberation and democracy through jazz was a profound research approach. This project was able to unite scholars from varied disciplines, as well as students and local SMCM community members, thus succeeding in the goal of bring SMCM closer together, engaging with the past for a better, more democratic, future.