Slavery was not uncommon in the St. Mary’s City landscape from 1634 up until 1864, when the Maryland Constitution outlawed slavery in the state. The College’s relationship with slavery is not found in its own documents due to a 1924 fire at Calvert Hall that destroyed the institution’s records. 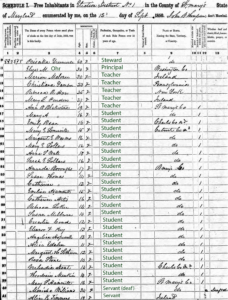 List of steward, principal, teachers, students and servants listed in the 1850 Federal Census

St. Mary’s College Archivist, Kent Randell, extensively researched outside sources including tax records and census data. He found a clear tie to the College’s relationship with slavery in the 1850 Census Schedule II. In that census, known as the slave census, Priscilla Greenwell, while acting as the Seminary’s steward, was listed as having six slaves.  Randell was able to find through his research on Priscilla Greenwell that she was not a woman of means and believes the slaves were listed as hers due to her title as steward but that the Seminary actually owned the six individuals. These six individuals are not mentioned in the 1849 St. Mary’s County Tax Assessment, because they were classified as property of the State of the Maryland and therefore not taxed by the County in 1849, but still counted in the 1850 Federal Census. 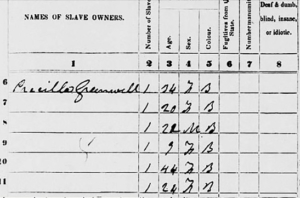 Randell explained those enslaved at the College likely would have done domestic work such as washing laundry and preparing meals.

Randell found through his research that at the close of the Civil War, the Seminary did not enjoin other former slave owners in being reimbursed for the loss of property (slaves) as a result of manumission and the Seminary is not mentioned in the 1864 Slave Census of St. Mary’s County, published by Agnes Kane Callum.