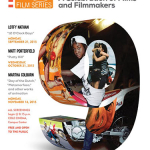 The fall 2015 series focused on the work of three Baltimore, MD filmmakers: Lotfy Nathan (“12 O’Clock Boys,” 2013), Matt Porterfield (“Putty Hill,” 2011), and Martha Colburn (stop-motion animation, 1995-2013). Our previous eight film series had been variously organized around themes or genres and had targeted experimental, independent, and (only sometimes) mainstream practices. For the Find out more »