Adam Werblow will be entering his 32nd season as the head coach of the St. Mary’s sailing team. During his tenure, the team has amassed 16 national titles and the Seahawk sailors have earned over 150 individual All-America honors.  In 2015 Adam was inducted into the ICSA Hall of Fame.

A 1988 graduate of Connecticut College, he was the captain of the sailing team. From 1989-1992, Werblow was a member of the U.S. Sailing Team in the Flying Dutchman class.

He has been the head coach for U.S. Youth Worlds Team eight times and led the team to two gold and two silver medals in 1991, the best record ever at those world championships. In 1999, Werblow was named the Developmental Coach-of-the-Year by the U.S. Sailing’s Olympic Sailing Committee.

He is married to Amy Moore and the couple resides in St. Mary’s City with their two children, Meredith and Michael, and their labrador, Fluke. 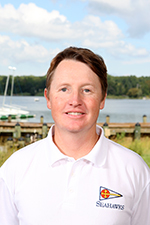 Bill Ward joined St. Mary’s sailing in the Fall of 2006, this will be his 11th season with the Seahawks.

In 15 years of collegiate coaching, Ward has coached teams that have won seven National Championships and amassed twenty-eight podium (top 3) finishes at National Championship Regattas. At Team Race Nationals, Ward’s teams have finished in the top 3 in eight of the last ten years ( 3 -1sts, 4 – 2nds, 1 -3rd).

In 2008, Ward was named the US Olympic Committee National Coach of the Year for Sailing by the U.S. Olympic Sailing Committee. That same year, he had the honor of coaching Team USA at the 2008 Beijing Olympic Games (Laser).

Bill was also on the coaching staff of the U.S. Sailing Team for the 2007 Pan Am Games in Rio de Janeiro, Brazil (Laser, Radial, Sunfish) and the 2011 ISAF World Championships in Perth, Australia (Women’s Match Racing).

In 2016, Bill was named S1D/ Henri Lloyd Coach of the Year by the readers of sail1design.com.

Bill graduated from Georgetown University in Washington, D.C. in 1996, where he was a two-time All-America Honorable Mention (1994 and 1995) and team captain. Ward led Georgetown to the program’s first-ever appearances at the ICSA Dinghy and Sloop National Championships.

Bill lives in Saint Inigoes, Maryland with his wife, Kelly, and their son, Liam.

Rick Loheed joined St. Mary’s Waterfront in the summer of 2008, organizing and scoring the SMCM ‘Governor’s Cup Yacht Race’ as his first duty. He loves teaching his 2 sections of the basic sailing class and hopes to teach more. He is a 100 ton licensed Master with Sail Endorsement, Inland.

Rick is an avid Sailor and accomplished Marine Engineer. In May 2000 he earned membership in the Society of Naval Architects and Marine Engineers and is a member of the International Hydrofoil Society. He believes strongly in a ‘vertically integrated’ approach, maintaining that hands on skill development must be included in higher education. Toward his personal goal of learning engineering design he is a skilled machinist and welder, computer programmer, data reduction specialist, design engineer and hydrodynamicist. He learned fluid dynamics building and operating gas turbine, rocket research apparatus, water channels and wind tunnels in a satellite laboratory of Purdue University’s School of Mechanical Engineering as he attended classes in MET.

Moving to Maryland in 1991 he began a career engineering control systems for advanced marine vehicles. He continued to race sailboats in Solomon’s and created the ‘St. George Island Yacht Club’ to further the sport of sailing. He continues to ‘import’ and promote his beloved Midwest scows, frequently teaching sailing using his MC-Scow.

Rick engineered and built much of the support and organizational equipment in use at the Waterfront today.

Brady started sailing Annapolis Yacht Club as a junior sailor, first in optimists, and then in Club 420’s and i420’s. In the optimist he represented the US at multiple international regattas and was a regular on the US National Team. In the 420 he skippered and crewed, and his junior sailing career finished when he represented the US at the 2010 i420 World Championship. In college, he was a starter for Old Dominion University and competed at multiple national championships. After finishing college he has sailed on many keel boats including: GP26s, Farr 40s, Fast 40s, C&C 30s, and J/70s.
Brady has been coaching since he was 18 years old. His first job was with Annapolis Yacht Club as their Optimist Race Team coach. He has been coaching high level junior sailors ever since, most recently for Annapolis Yacht Club as the 420 Race Team coach and with a private Optimist team called CBOT. Brady started working with St. Mary’s in 2020 and lives in Annapolis, Maryland in the summer.