Gideon Singer (’12) pursued varied interests as a student at SMCM, primarily focusing on archaeology and Australia, where he studied abroad. Gideon received an NSF scholarship to pay for his PhD coursework in anthropology at Purdue University, where he has combined his interests in material culture and Australia to explore e-waste (electronic waste) in Australia. This year, Gideon received a Fulbright award to support his work in Australia during the upcoming 2016-17 academic year. 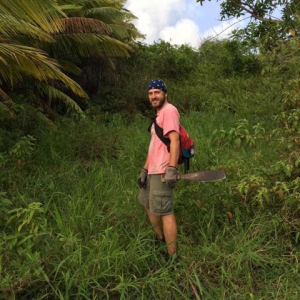 Sean Reid (’07) earned an MA in Anthropology at George Washington University, and is now pursing his PhD in Anthropology at Syracuse U. Sean received a Fulbright award this year to support his dissertation research next year in Ghana, West Africa. Since graduating from SMCM where he wrote his SMP on the topic of a French trading post in The Gambia, West Africa, Sean has pursued archaeology and underwater archaeology in the Caribbean (pictured below in Barbados), South Africa, and has worked in Sierra Leone and now Ghana.