We Have Been Here Before. Complacency Is Not The Answer.

In his poem “Nocturne at Bethesda,” African American Harlem Renaissance poet, Arna Bontemps, speaks to the lost and the found:

I thought I saw an angel flying low,
I thought I saw the flicker of a wing
Above the mulberry trees; but not again.
Bethesda sleeps. This ancient pool that healed
A host of bearded Jews does not awake.

This pool that once the angels troubled does not move
No angel stirs it now, no Saviour comes
With healing in His hands to raise the sick
And bid the lame man leap upon the ground.

The golden days are gone. Why do we wait
So long upon the marble steps, blood
Falling from our open wounds? and why
Do our black faces search the empty sky?
Is there something we have forgotten? some precious thing
We have lost, wandering in strange lands?

If someone were to ask about the history of St. Mary’s College of Maryland, what might the response be?  Perhaps it would be that we are a public liberal arts honors college – the “hidden gem” of the State.  An institution that boasts the second highest retention and four-year graduation rates in the State and is ranked 6th best public liberal arts college in the nation by U.S. News and World Report’s 2017 Best Colleges.  It would be possible to track the institution’s journey from its origins 176 years ago as a female seminary to its current status as an esteemed four-year baccalaureate college and provide a wealth of data to corroborate the statements.

Awareness and preservation of history is so important for it is only when we are one with our past that we are whole.  For this reason, I am grateful to the Maryland Commission on African American History and Culture, an organization committed to “discovering, preserving, collecting, and promoting Maryland’s African American heritage.”  You play a central role in this noble work of ensuring that our contributions to the State, the nation, and the world are discovered, recognized, and remembered – both for our benefit and for that of future generations.

This institution over which I preside has evolved into a place of academic excellence that compels all who enter to achieve at the highest level and inspires all to aspirations never before imagined. Yet, we remain a hidden gem to many within the state, especially to African Americans and marginalized populations.

I believe that we have a responsibility to ensure that African Americans and all marginalized groups have access to the best we as an institution of higher education and we as a nation have to offer.  This is not a statement of aspiration but rather a national imperative beyond the rhetoric of global citizenry.  It is about sustained personal and national viability, equity, prosperity, and peace.

As we, the elders, look around, we understand that we are at a point where history appears to have repeated itself.  The second half of Arna Bontemps’ poem speaks to initiative.  African Americans and other marginalized groups cannot wait for the moving of the water in the “stagnant pool” of Bethesda.  Because we are elders and know the history of this country, we understand how to identify the challenges we face, how to organize, how to strategize, and how to remain strong and focused as we seek to create a more just, humane, and equitable society for all.

I hear and see in the young people every day the fear of the unknown and the stress caused by the uncertainty of the future given today’s national climate.  Our young people need to understand our resilience, our resolve, our resourcefulness, our history as a people.  We have been here before.  We will push through and, in the by-and-by, come out stronger and at a better place.  Organizations like yours are essential in helping us stay the course.

I am honored to have been invited by Kelsey Bush, St. Mary’s County Commissioner and St. Mary’s College alumnus, to be here today.  I look forward to learning more about the Commission’s work and to identifying ways by which we can collaborate to ensure that although “the arc of the universe is long, it will continue to bend towards justice.” 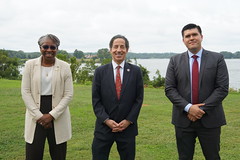