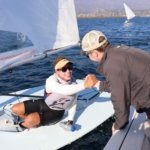 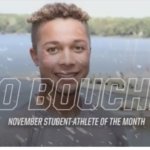 The Department of Athletics & Recreation executive team selects the Student-Athlete of the Month awardee each month.

Boucher represented St. Mary’s College of Maryland at the LaserPerformance Men’s Singlehanded Nationals hosted by UC Santa Barbara on Nov. 9-10. The sophomore from West River, Maryland returned to campus as a National Champion by taking first place in the regatta.

Boucher sat in third place of the 18 sailors after the first day which consisted of ten races. On Sunday (Nov. 10) the fleet completed four races which solidified Boucher’s title. Placing in the top five in nine of the races helped Boucher’s score a great deal. He finished the regatta with 65 points, just three points in front of the second-place winner, Richard McCann from the University of Miami.

The Seahawk sailing team will be back in action on Jan. 4 when they compete at the Rose Bowl hosted by the University of Southern California.