Andrew Koch, associate professor of chemistry, is the recipient of the 2015 Braude Award by the Maryland Section of the American Chemical Society. Continue Reading on the SMCM NewsRoom 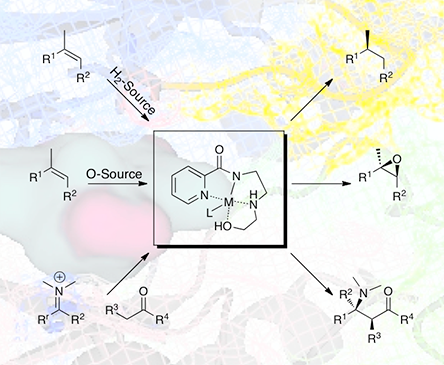 Many pharmaceuticals, biomolecules, and even insecticides posses a special property that chemists refer to as chirality. In general, chirality arises from the spatial arrangement of atoms in otherwise identical molecules. Hands, for example, are excellent examples of chirality. While each hand contains five digits that resemble those on the opposite hand, the left and right hands are not identical in three-dimensional space; in fact, they are mirror images. The significance of this difference is easily illustrated by attempting to place a glove on the wrong hand.

Two chiral molecules, while identical in every way except three-dimensional organization, can have very different properties. As a result, chemists have expended tremendous effort developing methods to control chirality. One particularly promising approach for controlling chirality is the use of catalysts that pass their chirality on to their products. Professor Streu has developed an exciting set of compounds that his research group is testing for just this purpose. Based upon their initial findings, his group was recently awarded a $55,000 Petroleum Research Fund grant from the American Chemical Society to support summer undergraduate researchers for the next two years, as well as chemicals and supplies.