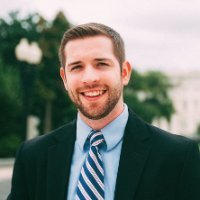 John Haltiwanger grew up in the Washington DC area and completed a Bachelor of Arts in History at St. Mary’s College of Maryland in 2010.

John  then went on to work in the Republic of Georgia, where he worked for the Georgian government teaching English. His studies of Georgia’s regional politics convinced him that he wanted to pursue a career involving politics, leading him to Scotland to study in Glasgow.

John completed an MSc in International Relations at the University of Glasgow (Dec. 2013). His master’s dissertation focused upon the use of drones (UAVs) and drone strikes by the United States during the post-9/11 period. The dissertation was largely a discussion of public sentiment in the United States towards the use of drones, and to the prosecution of warfare more generally during this period.

John was recently hired by Newsweek.

Congratulations to John on his new job and his successful post-St. Mary’s career!