Wondering what you’ll do after you finish your studies at St. Mary’s College? Alison Curry (’16) is returning to campus to share her experiences. Bring your questions and curiosities about the “real world,” transitioning to new studies and research, and finding a place for yourself in professional communities. Come out Thursday October, 25 in library Find out more »

Monday October 15 join the History Department for a presentation by Robert Miller II in Library 321 at 4:45! People have long been captivated by stories of dragons. Myths related to dragon slaying can be found across many civilizations around the world, even among the most ancient cultures including ancient Israel. In his book The Find out more » 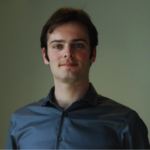 Dan has lived, studied, and worked in China on and off since 2011, the year the country overtook Japan as the world’s second largest economy. From his first week, when he was taken under wing by a corrupt and adulterous Beijing official, to just last week, when he came to D.C. with the Find out more »