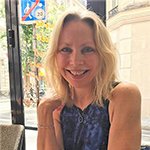 Adams is the author or coeditor of four books, including “A Taste for Comfort and Status: A Bourgeois Family in Eighteenth-Century France.” Her current book is co-authored by her sister Tracy Adams, professor of French in the School of Cultures, Languages and Linguistics at the University of Auckland.