History majors Caitlin Schoen and Megan Root as well as History minor Anna Vagnoni were inducted into the Zeta Chapter of Phi Beta Kappa at St. Mary’s College of Maryland on Friday March 30!

Five students at the College of William and Mary founded The Phi Beta Kappa Society in 1776, during the American Revolution. For more than two and a quarter centuries, the Society has embraced the principles of freedom of inquiry and liberty of thought and expression. Phi Beta Kappa (ΦΒΚ) stands for Φιλοσοφία Βίου Κυβερνήτης in Greek (Philosophia Biou Kybernētēs in Latin letters), which means “Love of learning is the guide of life,” the motto of the Society. These ideas, symbolized on Phi Beta Kappa’s distinctive gold key, still lay the foundations of personal freedom, scientific inquiry, liberty of conscience, and creative endeavor.

Today, the Phi Beta Kappa Society celebrates and advocates excellence in the liberal arts and sciences. Phi Beta Kappa chapters invite for induction the most outstanding arts and sciences students at 286 leading U.S. colleges and universities. The ideal Phi Beta Kappa member has demonstrated intellectual integrity, tolerance for other views, and a broad range of academic interests. Since the Society’s founding in 1776, 17 U.S. Presidents, 40 U.S. Supreme Court Justices, and more than 130 Nobel Laureates  have been inducted as members, along with countless authors, diplomats, athletes, researchers, actors, and business leaders. All of our members have one thing in common – their rigorous pursuit of excellence in the arts and sciences.

Professor Christine Adams, a current PBK member, also attended the ceremony. She was initiated into PBK at the University of Minnesota in 1984. 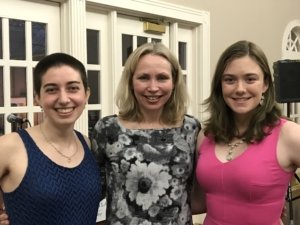 Congratulations on this amazing achievement!