Academic Common Market (ACM) is a tuition-savings program for college students living in the Southern Regional Education Board (SREB) states who want to pursue degrees that are not offered by their state institutions. Students can enroll in out-of-state institutions that offer their degree programs and pay the institution’s in-state tuition rates. More than 1,900 undergraduate and graduate programs are available. 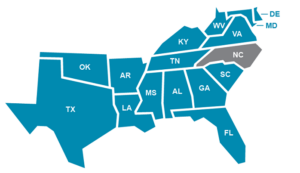 If you are a resident of a participating SREB member state, you may qualify to receive the benefits of the Academic Common Market (ACM).  Please follow these steps:

Visit the Southern Regional Education Board (SREB) website to review participating colleges and their degree offerings through ACM.

Select a program eligible for residents of your home state and complete the admission process at SMCM.
You must be accepted as an SMCM degree-seeking student in the specified major with a regular admission status.  If you are admitted to SMCM under probationary non-degree-seeking status, you will be ineligible for ACM participation.

Be certified as a resident of your home state by contacting your state’s ACM coordinator.  Each participating state has its own application process and timeline.  Normally, certification takes approximately four to six weeks.  Once you have been approved by your home state for participation in an ACM program, a letter of certification will be sent to SMCM for processing the in-state tuition rate.

Upon receipt of state certification, the ACM coordinator at St. Mary’s College of Maryland will send a memo of approval to the necessary offices on campus to change student status to in-state tuition rates.  A copy will be forwarded to the student’s home address.

Students applying for ACM at St. Mary’s College of Maryland should apply to their home state at least 6 to 8 weeks prior to the start of spring and fall semesters.  Any delay in receiving certification from a home state could cause students to incur late fees at SMCM.  Please note that ACM benefits are not retroactive to previous semesters.

Remaining in the Academic Common Market

Requirements for Remaining in the ACM Program

Change of major and/or concentration, declaring a double major, lack of full-time and continuous enrollment (Fall & Spring semesters only), and lack of good academic standing will lead to loss of the Academic Common Market tuition credit.

The Southern Regional Education Board (SREB) guidelines state, “Independent combinations of available degrees programs … should not be considered, nor should double major/minor combinations that are independently set by students.  If both major programs of study qualify for inclusion in ACM, then the state and institution may allow the student to enroll in both programs.

Lack of Full and Continuous Enrollment

Students must be fully and continuously enrolled each major semester (Fall/Spring) in order to receive the ACM tuition credits.

ACM will continue without continuous enrollment under the following conditions only:

You must remain in good academic standing in your ACM-eligible major to continue receiving ACM tuition benefits.

Office of the Registrar