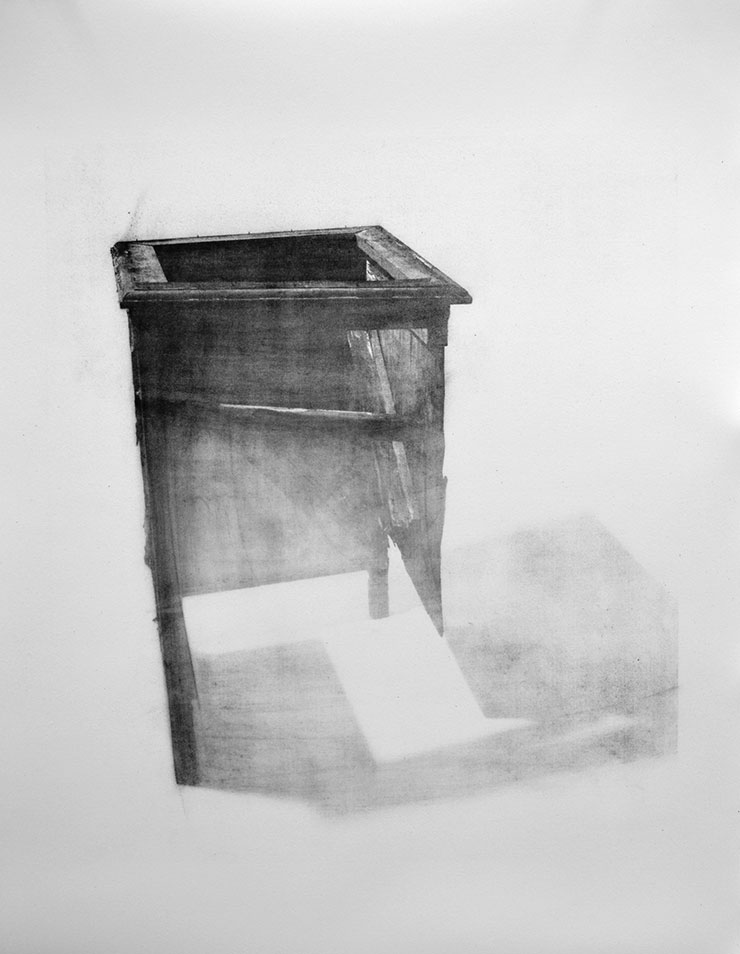 David Farrar works in a variety of different media including printmaking, sculpture and installation. He is interested in the forms of found utilitarian objects, which are frequently wooden and have become deteriorated to some degree. His work involves changing and breaking down these forms either through image making or physically manipulating the objects until they take on new identities. Another aspect to his work is representation and authenticity, creating pieces that have the appearance of being something else.

David is originally from Oxford and after completing a foundation course in art and design at Oxford Brookes University he moved to Glasgow to study Fine Art: Painting & Printmaking at The Glasgow School of Art, which he graduated from in 2013 with BA (hons). After graduating David moved back to Oxford and was a visiting tutor at Oxford Brookes University where he held tutorial sessions with the current foundation students, advising them on their portfolios in the run up to their University choices. During this time he was also a member of the creative team at a themed activity workshop for children and their families called ‘The Event’, and an art technician for ‘The CS Lewis Festival’, (both in association with Holy Trinity Church, Oxford.) For this David was one of a team of on-site technicians who designed and prepared ‘Narnian-esque’ cardboard cut-outs for children to paint onto, working with them to transform the surrounding area into Narnia. David has exhibited in Oxford, Glasgow, Edinburgh and Belgium. Most recently this includes the ‘Print Art Fair’ at Frans Masereel Centrum in Belgium (February 2014), ‘The Artist’s Proofs’ a solo show at The Coach House in Oxford (December 2013), ‘Octavo Fika’ as part of ‘Book Week Scotland’ at the Ocean Terminal in Edinburgh (2013), The Glasgow School of Art Degree Show 2013 (2013) and an Archives Exhibition at Frans Masereel Centrum (2013).  http://david-farrar.com