Department of History > Archives for 2015

There was a great turnout last Tuesday for the first meeting of the new History Club. The members there elected officers of the club and the results are as follows: President- Andrew Messick Vice President- Jackson Teets Secretary- Lenora Yoder Treasurer- Ian Chrisler Historian- Lee Morgan The club is involved with providing the campus community Find out more »

Tiffany (Deutscher) Soderholm ’07 Completed MA in History (’10) and MAT (’12) at Monmouth University and is teaching history at Perth Amboy High School in Perth Amboy, NJ. Ashley Drexel (Barreto) ‘13 Working as a paralegal for the U.S. Department of Transportation and the U.S. Army Reserves, while pursuing her J.D. at the University of Find out more » 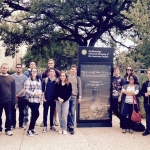 Prof. Brodsky’s HIST378 and HIST253 classes visited the National Museum of the American Indian in DC on September 22nd. We toured the “The Great Inca Road” exhibit, and had the pleasure to hear the curator (Dr. Ramiro Matos) tell us the story of this engineering marvel.

Congratulations to Dr. Jeremy Young (SMCM ’06) who just had his article “Transformation in the Tabernacle: Billy Sunday’s Converts and Emotional Experience in the Progressive Era” published in The Journal of the Gilded Age and the Progressive Era (July 2015). Learn More >>

Dr. Ken Cohen has been awarded a Fulbright Scholarship for 2015-2016. Dr. Cohen will be spending the year in Ivory Coast. 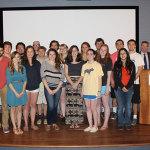