Published by Indiana University Press on October, 27 2016 as a part of the Indiana Series in Sephardi and Mizrahi Studies

At the turn of the 20th century, Jews from North Africa and the Middle East were called Turcos (“Turks”), and they were seen as distinct from Ashkenazim, not even identified as Jews. Adriana M. Brodsky follows the history of Sephardim as they arrived in Argentina, created immigrant organizations, founded synagogues and cemeteries, and built strong ties with coreligionists around the country. She theorizes that fragmentation based on areas of origin gave way to the gradual construction of a single Sephardi identity, predicated both on Zionist identification (with the State of Israel) and “national” feelings (for Argentina), and that Sephardi Jews assumed leadership roles in national Jewish organizations once they integrated into the much larger Askenazi community. Rather than assume that Sephardi identity was fixed and unchanging, Brodsky highlights the strategic nature of this identity, constructed both from within the various Sephardi groups and from the outside, and reveals that Jewish identity must be understood as part of the process of becoming Argentine. 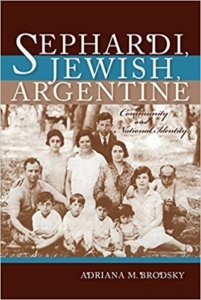