Department of International Languages and Cultures > 2017 > Archives for April 2017 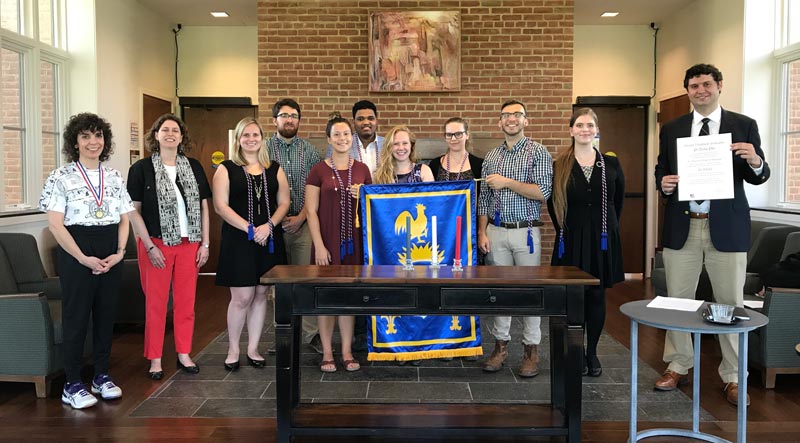 Vive le français à SMCM! On Thursday April 20th, 2017, nine outstanding St. Mary’s students of French were inducted into the College’s first ever chapter of Pi Delta Phi, the National French Honor Society. Founded in 1906, Pi Delta Phi is, according to its website, ” the oldest academic honor society for a modern foreign language in the United States.” Boasting 75,000 members and 360 chapters, Pi Delta Phi aims to “recognize outstanding scholarship in the French language and its literatures, to increase the knowledge and appreciation of Americans for the cultural contributions of the French-speaking world, and to stimulate and to encourage French and francophone cultural activities.”

With Pi Delta Phi Regional Vice-President Dr. Eileen Angelini presiding, the nine inductees pledged to uphold the values of the Society and to promote French and Francophone culture at home and abroad. Dr. Angelini presented the official charter for the St. Mary’s chapter (known by the Greek letters “Pi Theta”) and the students received a certificate of membership, pins, and red and blue cords to be worn at graduation.

One highlight of the ceremony was a performance by the student a capella group PING, led by Professor of Music Larry Vote. The group’s performance of a folksong in Haitian Creole was a stirring reminder of the richness and diversity of the Francophone world beyond the borders of metropolitan France.

The inductees ranged from sophomores planning to study abroad in Montpellier and Grenoble, to a senior about to begin the Peace Corps in Francophone Africa and another senior who will be teaching English in France.

With an emphasis on fostering meaningful cross-cultural connections, the values of Pi Delta Phi are closely aligned with those of the College as it strives to fulfill its mission to educate “responsible and thoughtful global citizens and leaders”. The International Languages and Cultures Department extends its congratulations to the inaugural inductees of Pi Delta Phi, Class of 2017: