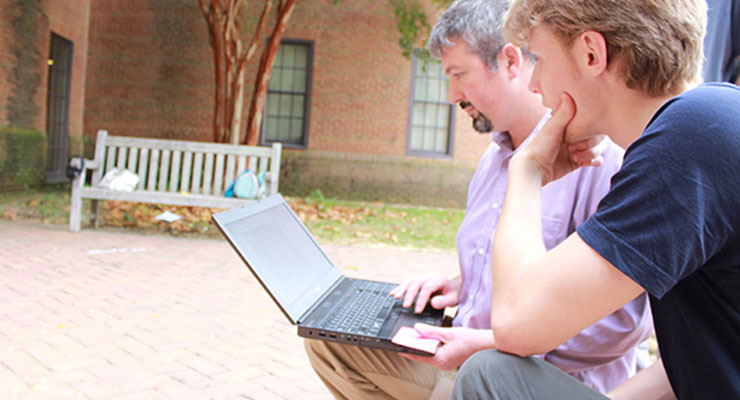 Students perform research in and outside of the classroom. Students benefit from research training, state-of-the-art equipment, and student/professor research collaborations. Physics students hone their speaking skills with lab presentations in both Fundamentals of Physics 3 and Advanced Laboratory courses, as well as project presentations in many upper level courses. Students work with professors on St. Mary’s Projects, directed research courses, and summer internships. Students also receive training in finding internships beyond St. Mary’s.

Professor Adler has been in a long-term collaboration with Dr. Frank Narducci of NAWCAD. The research in this collaboration involves using ultra-cold atoms to build highly sensitive magnetometers for Navy uses. The project involves fundamental properties of quantum mechanics: the idea that atoms, like light waves, can be interfered. Currently, his research involves building this system; in particular, he is constructing a dual MOT (Magneto-Optical Trap) for trapping and cooling atoms for the interferometer. This involves the design and construction of a novel electromagnet system.

For the last two decades, Dr. Adler has also been involved with research in atmospheric optics: optic of the rainbow, ice crystal halos, the Green Flash, and other aspects of the interaction of light with the atmosphere and landscape. He hosted the 10th International “Light and Color in the Open Air” conference at St. Mary’s College in June, 2010. This is a gathering of scientists from around the world who study atmospheric optics; it was the first international scientific conference ever hosted by the college. The photographic exhibition running parallel to the conference, “The Atmosphere Exposed”, has been displayed at the National Science Foundation main headquarters as part of the “Art of Science” program, and traveled to the American Center for Physics in May, 2012.

He is interested in a wide variety of other topics: he currently is researching the interrelation between science and music in the work of Vincenzo Galilei (Galileo’s father) and writing a book on the science of science fiction, which will be published by Princeton University Press in late 2013.

Professor Grossman’s research with students falls into two categories: (1) applications of laser cooling & trapping of atoms and (2) applications of non-standard sensors in unmanned systems. Students have been co-authors on many presentations of this research at national conferences. Sara DeSavage ’10 was featured for her research in the SPS Observer, the national magazine of the Society of Physics students. Dan Powell ’09 won St. Mary’s Geneva Boone Award for Outstanding St. Mary’s Project.

The group pursues two laser cooling projects which have received financial support from the Office of Naval Research and from Research Corporation for Science Advancement. In one project, Prof. Grossman and students are constructing microchip traps for atoms which could one day be the building blocks of a quantum computer. In the second project, a collaboration with Navy scientists researches using laser cooled and trapped atoms for sensors to be deployed on aircraft.  Many students who worked in this collaboration have gone on to employment with NAVAIR.

Professor Grossman and students also research the use of sensors in unmanned systems.  Luke Quinn ’20 work on mounting an extremely sensitive atomic magnetometer on an unmanned aerial system (UAS) for archaeological surveys.

The high-energy phenomenology group is delighted that alum Jeremy Perrin was a finalist for the American Physical Society’s 2013 Apker Award which recognizes outstanding research in physics by undergraduate students. Jeremy developed a seven-dimensional model with one warped dimension and two additional dimensions compactified on either a sphere or a torus. Together Jeremy and Professor De Pree wrote a paper that is currently under in the peer review process required prior to publication.

Professor De Pree developed “Career Moments in Physics”, a curriculum used in Fundamentals of Physics 3 to help students explore their career options and find summer research opportunities both on and off campus.

Professor Milne investigates the acoustical properties of inhomogeneous materials, which have a number of interesting applications in the medical field of ultrasound. She is particularly interested in using ultrasound to examine cardiac tissue, but she and her students have also looked at other materials that exhibit similar long-fiber structure such as pineapples.

Radio Astronomy of the Outer Layers of Red Dwarf Stars

Professor Villadsen uses radio-wavelength telescopes, like the Very Large Array in New Mexico, to study nearby stars. Her Radio Stars research group focuses on characterizing magnetic processes in the outer layers of small red dwarf stars (the most common type of star in the universe), to understand how those stars accelerate particles and interact with planets.