Support Physics
Department of Physics > Awards & Recognition
The SMCM Physics program received the 2017 Award for Improving Undergraduate Physics Education from the American Physical Society (APS).  The award “seeks to recognize excellence in undergraduate physics education and support best practices in education at the undergraduate level.”
Physics Today published an article in 2019, describing how SMCM Physics fosters a culture of inclusivity.
The SMCM Physics program  is highlighted as a role model in the report, “Phys21: Preparing Physics Students for 21st Century Careers.” The report, published by the Joint Task Force on Undergraduate Physics Programs (J-TUPP) and convened by the American Physical Society (APS) and the American Association of Physics Teachers (AAPT), selected the College as one of five case studies of successful, innovative physics programs.
Arvind Srinivasan ’17 won a prestigious Science, Mathematics And Research for Transformation (SMART) Scholarship from the Department of Defense. The scholarship covers tuition and expenses. It also provides a summer research internship and employment placement after graduation.  He was also a finalist for the American Physical Society’s Leroy Apker Award for outstanding undergraduate physics work, one of just seven finalists in the country.
Prof. Adler received the American Institute of Physics award for Science Communication in 2015 for his book, Wizards, Aliens, and Starships: Physics and Math in Fantasy and Science Fiction.  The book was also named to several lists of the best physics books or the best science books for the year.
Arvind Srinivasan was a 2017 finalist and Jeremy Perrin was a 2013 finalist for the American Physical Society’s LeRoy Apker Award for undergraduate physics achievement. Only two recipients are selected nationally each year.

All award recipients of department awards and scholarship are selected by committee. There is no application process.

Established in 1993 to recognize a student who has demonstrated academic excellence and achievement in the discipline.

Established in 2016 with personal funding by the physics faculty.

Recognizes a student Fundamentals of Physics who has shown great growth and engagement.

Recognizes a student in 200/300-level courses who has demonstrated academic merit and engagement with material.

Recognizes a student who has helped advance the physics program, Physics Club, and/or the greater physics community through volunteer work. 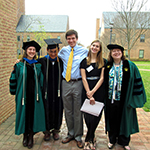