Center for the Study of Democracy 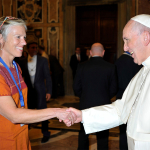 Francis Pope Francis, who will visit the United States in September, is the first Jesuit pope and the first non‐European pope in more than 1,200 years. He has made headlines with his outspoken style and by venturing into areas of politics and economy with comments that have attracted both praise and criticism. Pope Francis has Find out more »