Center for the Study of Democracy / CSD Event Archive / What’s Next Mr. Putin? 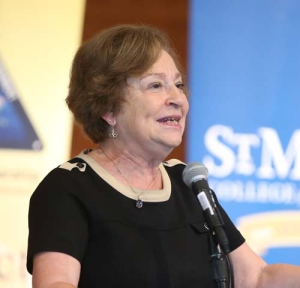 “Russia is a riddle wrapped in a mystery inside an enigma”, said Winston Churchill, England’s Prime Minister in the early 1940s and 1950s. In recent years, Western analysts see Russia’s foreign policy full of riddles: some mystifying, others misleading and all serving to undermine a modicum of predictability that characterized the relations between Washington and Moscow during the Cold War years.

The Center for the Study of Democracy and The Patuxent Partnership (TPP) invited Dr. Angela Stent, the nation’s foremost expert on Russia, to unravel the Russian mystery at St Mary’s on October 7th, the day that coincidentally was the birthday of Russia’s President Vladimir Putin, the President of the Russian Federation for 15 years. “During his third term as President, starting in 2012, Russia’s foreign policy has become increasingly nationalistic and assertive and also increasingly unpredictable”, Dr. Stent said.

Dr. Maija Harkonen, who introduced the guest speaker with Bonnie Green, Executive Director of TPP, noted that Dr. Stent has served with distinction in both academia and government. She is Director of the Center for Eurasian, Russian and East European Studies at Georgetown University and Professor of Government and Foreign Service at Georgetown. She also serves as Senior Fellow at the Brookings Institution and co-chairs its Hewett Forum on Post-Soviet Affairs. In addition, Dr. Stent served as National Intelligence Officer for Russia and Eurasia at the National Intelligence Council (2004-2006) and in the Office of Policy Planning, at the U.S. Department of State.

“My working and personal relationship with President Obama is marked by growing trust,” wrote Russian President Vladimir Putin in The New York Times on September 9, 2013. Since then Russia has annexed Crimea, launched a military intervention in Ukraine, frequently violated Northern European countries’ air space and unilaterally staked a claim to a vast area of the Artic Ocean, including the North Pole. On September 30th, Russia carried out a series of air strikes in Syria, notifying the United States only one hour before they took place by contacting the American Embassy in Baghdad.

“Russia is a riddle, a puzzle and a mystery to many Americans because the country lacks the two pillars of a functioning democracy: transparency and openness,” said Dr. Maija Harkonen, Executive Director of the Center of the Study of Democracy. Dr. Harkonen is a frequent visitor to Russia where she has lived and conducted research. “Add the recent posturing by Russian military and political leaders,” Harkonen continued, “and Russia becomes downright incomprehensible to those Americans who have little knowledge of the country, its culture and history.”

According to a Pew Research Center survey released in early August 2015, American’s view of Russia has deteriorated in recent years. In 2011, about half of American (49%) voiced a favorable opinion of Russia, but in 2015, just 22% of them expressed such sentiments.

Learning to Read the Russian Mind

The only way to lift the veil of mystery that surrounds Russia and its leaders is to learn more about their perceptions of the United States and the forces that shape their views of the world and Russia’s place among the nations.

According to Dr. Stent, Moscow views Washington with suspicion, claiming that its true intention is to encircle Russia and promote regime change in Moscow. Mistrust among the leaders seems to spread quickly throughout their respective countries. Anti-U.S. sentiments in Russia are record high, according to Russia’s leading pollster Leveda Center. Out of all respondents who were polled in May 2015, 71 % said they had a negative or somewhat negative attitude towards the United States.

In spite of mutual suspicions, there are people in both countries who are interested in learning about each other and building mutually beneficial relationships in areas where cooperation rather than confrontation makes sense.

“We are proud to note that among faculty of St Mary’s, we have excellent professors teaching various aspects of Russia to our students,” noted Dr. Tuajuanda C. Jordan, president of SMCM in her welcoming speech. Among them are Professor Tom Barret, who teaches Russian history and popular culture, and Professor Michael Cain who discusses post-Soviet transitional economies and energy politics, noted Dr. Jordan. “Among our other faculty and staff, we have many people who are knowledgeable about Russian art, literature, language and culture,” Dr. Jordan continued.

Dr. Stent’s latest book, “The Limits of Partnership: U.S.-Russian Relations in the Twenty-First Century” is a comprehensive discussion of the evolving nature of Russia’s foreign policy and the motivations behind Putin’s changing relationship with the United States. In her book, Dr. Stent takes the reader behind the scenes to discover the fundamental differences between the United States and Russia, always going back to the main question of the book: “Why has it been so difficult to develop a productive and more predictable post-Cold-War U.S.-Russian partnership?” 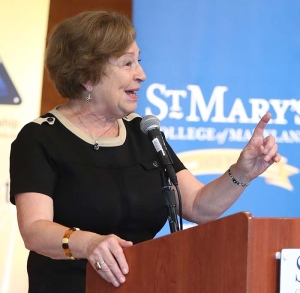 “The United States and Russia have divergent value systems, in particular their contrasting views of the purposes and means of acceptable State behavior at home and abroad,” Stent explains.

In Russia, the country’s leaders see no need to copy the Western style of democracy, Dr. Stent writes in her book. Instead of liberal democracy, Putin’s Chief of Staff Vladislav Surkov, revived the concept of “sovereign democracy” in 2006 as a counterideology to Western democracy promotion in Russia. Later, President Putin put explicit emphasis on the part of “sovereignty” at the expense of “democracy” and continued pursuing an increased international status for Russia.

John Beyrle, former ambassador to Russia whom Dr. Stent interviewed for her book, explained: “Russia was looking for respect and acknowledgement that Russia’s voice mattered and the United States would listen to Russia and act as if its opinion mattered.”

In the Soviet era, Russian foreign policy was conducted through predictable channels and institutions, Dr. Stent said. Predictability and pragmatism characterized Russian foreign policy also during Putin’s first term, albeit to a lesser degree. During his third term, however, the leadership has taken a different — first assertive, then aggressive — approach to international relations, leaving Western powers guessing Russia’s intentions and next moves.

The Americans are not, however, the only ones unsure about Putin’s next moves. Russian intervention in Syria has also left ordinary people in Russia confused. The Russian State media is developing a narrative that claims that Russia is fighting against the Islamic State of Iraq and the Levant (ISIS or ISIL) with the Americans. At the same time, news clips celebrate Russia’s resolve to stand up to America by supporting Syria’s President al-Assad.

In the end, the price the ordinary Russians will have to pay for Putin’s attempts to establish Russia as a great power by force may well turn out to be too high in terms of human casualties and a worsening economic situation in Russia. The Russians will survive, as many of them so often remind us, but will that be enough for those who want better heath care, better education, and better salaries?