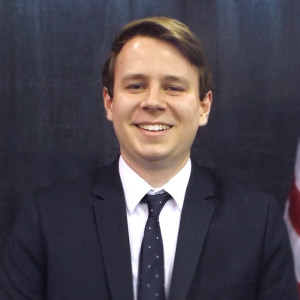 This award is intended to recognize and support St. Mary’s College students who endeavor to pursue careers in public service or the law, international relations or other activities that promote civil society in the country.

The 2015 winner of this competitive award is Eric Schroeder who majors in political science and public policy at SMCM. Eric Schroeder is interested in pursuing career in law, more specifically in criminal defense. He is also interested in politics and learning more about facilitating communication between elected officials and the electorate. “This award would enable me to affect concrete, positive change on our democracy either through the legislature or through the courts,” Eric stated in his application.

History of the Award

Judge Thomas Penfield Jackson served our nation, our state and the St. Mary’s community with distinction for more than a half century. After serving in the U.S. Navy, Jackson earned his law degree from Harvard in 1964. As an attorney in his father’s law firm, he was known as a fearsome litigator. In 1982, President Ronald Reagan appointed Thomas Penfield Jackson to the U.S. District Court for the District of Columbia. Jackson presided over many nationally important cases, including the 1997 case involving the constitutionality of the presidential line-item vetoand the Microsoft anti-trust case.

Thomas Penfield Jackson was appointed to the St. Mary’s College Board of Trustees in 2001 and in 2002 he became a member of the Center’s Advisory Board. Throughout his career at St. Mary’s, he provided frequent guest lectures on law and history. He also provided strong support for the mission of the Center for the Study of Democracy, emphasizing the importance of the Center in building responsible citizens.

As a lasting tribute to his many contributions to the College and the nation, the Thomas Penfield Jackson Award for Civic Responsibility and Democratic Citizenship honors his lifetime of service to our country and his commitment to the Center for the Study of Democracy at St. Mary’s College of Maryland.