Dr. Angela Davis – The Voice of the Oppressed

Center for the Study of Democracy / CSD Event Archive / Dr. Angela Davis – The Voice of the Oppressed 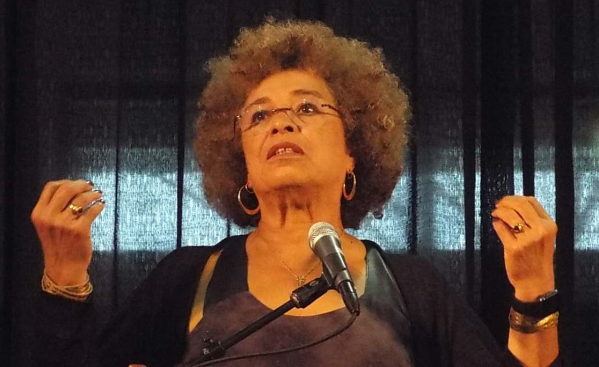 “There are 2.5 million people behind bars in the United States, Dr. Angela Davis started her public lecture at St Mary’s College of Maryland on October 29, 2015. “Most are poor and people of color. Since 2010, the female jail population has been the fastest growing correctional population.”

Dr. Davis, a legendary counterculture activist and educator who has gained widespread respect for her ongoing work to combat various forms of oppression, delivered the 2015 Margaret Brent Lecture: “Racial Justice, Feminism and the Prison Industrial Complex”. The lecture was sponsored by the Women, Gender, and Sexuality Studies Program; the Office of the President; the Lecture & Fine Arts Committee; and the Center for the Study of Democracy. 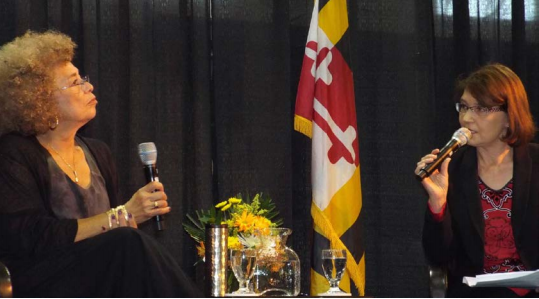 Dr. Maija Harkonen, Executive Director of the Center for the Study of Democracy interviews Angela Davis, an iconic political scholar and activist at St Mary’s College on October 29, 2015.

When speaking of mass incarceration, Angela Davis draws on her own activist experiences in the early 1970s, when she spent 18 months in jail and on trial after being placed on the FBI’s Ten Most Wanted List. Today, she is distinguished Professor Emerita at the University of California, Santa Cruz, and a leading advocate for prison reform. She focuses on social problems associated with incarceration and the links between criminalization, poverty, and racial discrimination.

The United States is home to more prisoners than any other country in the world. Why? “Most inmates who were sentenced in recent years are in prisons and jails for nonviolent offences such as drug possession or use,” explains Dr. Davis. The War on Drugs that was waged in the 1980s led to the passage in Congress draconian penalties giving the courts the right to imprison individuals for nonviolent drug offences and increasing the number of inmates dramatically. Yet the War on Drugs did not succeed in reducing the use of illegal drugs. On the contrary, illicit drug use has continued to increase spiking up with the crack epidemic of the 1980s and 1990s and the current heroin epidemic.

Mass incarceration is not, however, a result of mere sentencing guidelines but is driven by systemic factors, explains Angela Davis. At the root of mass incarceration is the undercurrent of discrimination and repression of especially African-American males. While white people are more likely to commit drug crimes, it is the blacks and other colored people that end up behind bars. This type of structural racism, notes Dr. Davis, should be analyzed in the social and historical context that includes not only the biased institutions of the modern state but also racially biased policies embedded in the War on Drugs, the attack on the welfare state, reduction of social services, rising unemployment among the minorities and an overall increase in economic inequality.

Jailing for Profit: The Prison-Industrial Complex

“The prison-industrial complex is a means to criminalize and demonize American black people and other minorities for profit,” states Angela Davis. “It nourishes the racism that lives in the deep structures of our society.”

Angela Davis first used the concept ‘prison-industrial complex’ in her speech in 1998 and she is often credited for coining the term. According to Dr. Davis, the prison-industrial complex includes private and public prisons and also juvenile facilities, military prisons and interrogation centers. The most profitable sector of the private-prison business is composed of immigrant detention centers, Dr. Davis notes.

At the root of the evolution of the prison-industrial complex is prison privatization that began in earnest in the 1980s, Dr. Davis explains. Soon after, owning and operating correctional facilities became big business, generating $5 billion in revenue in 2011. Companies such as Correctional Corporation of America (CCA) and the GEO Group reaped the profits attracting investments from household names, including the Bank of America, Fidelity Investments and Wells Fargo and also from many universities around the nation. In April 2015, Columbia University became the first U.S. College to divest from private prison companies.

Once convicted, a person who is sentenced is marked for life. Collateral consequences prolong the punishment by adding unanticipated burden on individuals trying to re-enter society. Collateral consequences, explains Dr. Davis, punish not only former inmates but also their families and communities. In addition to death by violence, the black communities are decimated by civil death — a loss of civil rights, including the right to vote, says Davis.

The impact of collateral damage is widespread. Many collateral consequences affect former inmates’ employment and business opportunities. They also affect their eligibility for such public benefits as student loans and housing. Inability to gain employment because of the former conviction reduces former prisoners’ abilities to support their families and become contributing members of their communities. Many resort to crime to make ends meet. Too many end up behind bars again contributing to high recidivism rates. This is how prisons turn people into career criminals, explains Davis.

According to recent studies on recidivism by Bureau of Justice Statistics (BJS), more than 75% of prisoners are arrested again within 5 years. Recidivism refers to a person’s relapse into criminal behavior after having served his or her sentence.

How many in the audience has heard about a campaign called “Ban the Box?” Dr. Davis asked. “Ban the Box” is a campaign to end the requirement that job applicants check a box on the applications if they have a criminal record,” Dr. Davis explained. It is because of this box that many former inmates were barred from getting employment.

According to on-line publication Drugs Wars Facts, 50 % of sentenced inmates in federal prison in September 2014 were servicing time for drug offenses. Each one of them, including of young first-time offenders, is marked for life. With decriminalization of marihuana in some form in twenty-three states, some offences, such as the possession of small amounts of marijuana, are no longer crimes. Yet, former inmates with criminal records for nonviolent drug-related crimes have been systematically eliminated from the pool of desirable job applicants by the box. Hundreds of thousands have found themselves plunged into long-term unemployment.

Show Mercy to the Elderly Prisoners

The number of elderly prisoners has skyrocketed in the past 15 years. They need wheelchairs, walkers, portable oxygen, hearing aids, and personal assistants to help them to get dressed. Many suffer from memory problems. “They pose no threat to society,” says Angela Davis. “There is no reason to keep them imprisoned.”

The Department of Justice found that the Bureau of Prisons is often unable to provide adequate and humane housing and care for elderly. There are no enough handicapped-accessible cells for those who can no longer walk. In addition, correctional facilities are not prepared to treat people with illnesses such as Alzheimer’s disease. The recidivism rate of adults over 65 years old is only 4 percent.

Out of Sight, Out of Mind

“Prisons do not disappear problems, they disappear human beings,” Angela Davis wrote in 1998 in the online magazine called Colorlines. Hundreds of thousands of black men are missing from everyday life, Davis notes referring to the New York Times article published April 20th, 2015. In New York City alone, almost 120, 000 black men between the ages of 25 and 54 are absent, away from their families and communities. They are put in cages along with the mentally ill, frail seniors and illegal immigrants. Out of sight, out of mind.

Post-Script: A Step Toward Reform

On November 2 President Obama announced a new directive instructing the Office of Personnel Management to delay criminal background checks for all federal and federally contracted jobs until later in the application process. Applicants for federal jobs will not be asked about a criminal record until later in the review process. The directive will not apply to private federal contractors. Banning the box will help former inmates assimilate back into the society.

President Obama has also called Congress to pass the Sentencing Reform and Corrections Act of 2015 that would provide new incentives and opportunities for those incarcerated to participate in programs proven to reduce recidivism and help eliminate barriers to economic opportunity following release. As thousands of inmates imprisoned for drug-related offences are being released from prisons, a need for additional transitional and job-training programs rises. These programs are needed to help former prisoners find jobs and housing and also with issues related to substance abuse and mental health. Such programs are important not only for the prisoners but also for their communities. 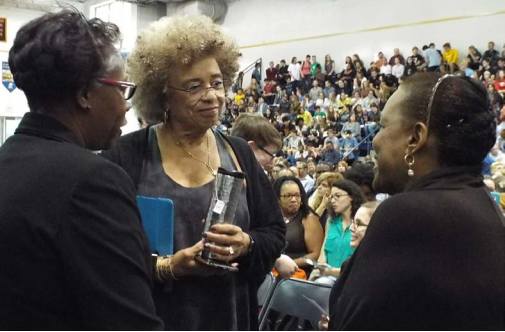 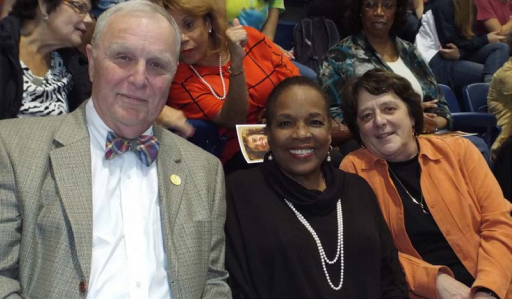 Betty Currie is flanked by G. Thomas Daugherty, member of the Board of Directors of St. Mary’s College of Maryland Foundation and Helen Ginn Daugherty, Professor of Sociology at SMCM and Co-Director of the Economic Inequality Program of the Center for the Study of Democracy.