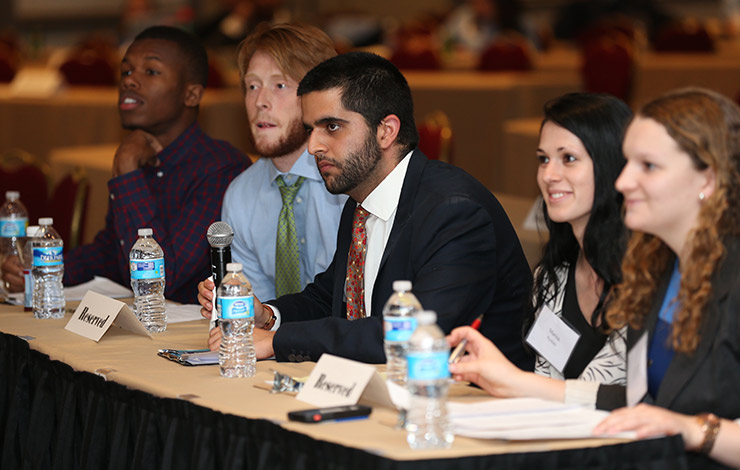 Is the American Dream really slipping away from Americans of modest and less than modest means? The fear that many in the country will no longer be able to get ahead by striving and hard work alone found solid support from a group of academics, elected officials, and policy foundations at a two-day conference in Baltimore May 30 and 31.

Speakers at the conference, “United, Not Divided – The Public Forum on Economic Inequality and the Opportunity Gap,” presented statistical evidence that the wage gap between the rich and the middle class is widening and expressed concern that the resulting public backlash is eroding the country’s democratic system of government. 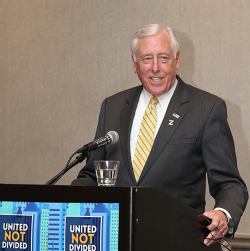 “This is the most important issue in our country today,” said Congressman Steny Hoyer (D-MD). “If we don’t give hope and opportunity to our people, our democracy as we know it will be at risk.” The phenomenon is making people fearful, he said, and that fear is being expressed in the current presidential election campaign by people supporting Donald Trump and Bernie Sanders.

The conference was organized by the Center for the Study of Democracy, part of St. Mary’s College of Maryland, and drew about 250 registered participants. 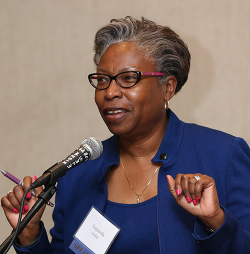 Dr. Tuajuanda Jordan, President of the college, cited recent research that indicates that growing political polarization in the United States is not due just to politicians’ impotence or unwillingness to work together but is also related to the widening gap between the rich and poor. The study showed that the states that have the highest level of inequality also have the most political polarization. 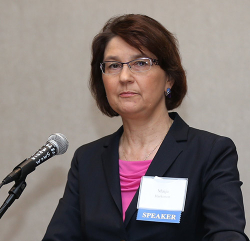 Dr. Maija Harkonen, Executive Director of the Center, told the conference that economic inequality has been increasing faster in the U.S. than in other countries. “It has contributed to a nagging sense of gloom and the feeling that all is not right in our democracy,” she said. “Our country is hurting. Increasing economic inequality has resulted in falling living standards for many of us. It is shrinking the middle class. It is preventing us from reaching our dreams of upward social and economic mobility. Worse yet, it is also eroding our democratic social order and stability.”

The Rise of Economic Inequality

The concentration of income at the very top of the scale has risen to a level not seen since the “Roaring Twenties,” more than 80 years ago, when the top 1 percent of Americans owned more than 50 percent of the wealth in the country, said Dr. Nasir Khilji, Senior Economist at the Office of Economic Policy in the U.S. Department of the Treasury. He said the increase in income disparity is not a new phenomenon; it began in the late 1970s after a period of substantial economic growth following World War II. During that period, incomes grew rapidly for everyone at about twice the rate of inflation. 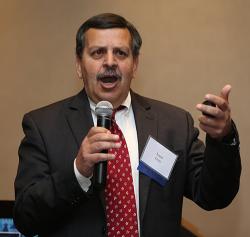 He cited that statistics show, however, that the increasing disparity is not due to a change in the ratio of returns between labor and capital but rather due to changes in the distribution of both labor income and capital income.

He also warned that the boom of the post-war period is not likely to be repeated. “We were on top of the world during that time,” he said. “We had no competition.”

The speakers listed the immigration of cheap labor, globalization, technological change, and automation as the primary causes of the increasing disparity in income. One of the results in the Baltimore area has been the disappearance of what was once the region’s largest employer, Bethlehem Steel. Speakers noted that ordinary people without a college education used to be able to find a job with this firm and earn a comfortable living. Now, the largest employer in the area is Johns Hopkins Medical Services, and the jobs associated with the medical field require higher education and specific skills, leaving few places to go for workers with only a high school education.

Is Rolling Back Globalization an Answer? 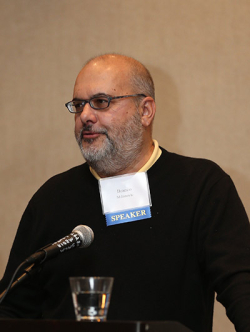 Dr. Branco Milanovic, Professor of Economics at City University of New York, warned that rolling back globalization, which has been going on for the last 30 years, would be extremely difficult now. The risk, he said, would be a flight of capital. He suggested that the only way to reverse the growth of inequality would be to redistribute the “underlying assets” of the economy, resulting in greater distribution of human, physical, and financial capital.

Professor Milanovic’s book, “The Haves and the Have- Nots,” explains the evolution of income inequality over the years within countries and between countries. 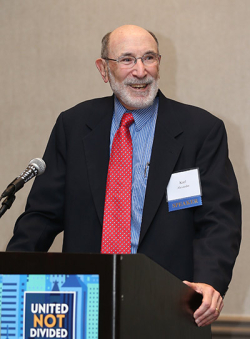 Several of the speakers dealt with the opportunity gap – the inability of poor people, especially poor African-Americans, to overcome the barriers that lead to gainful employment. Dr. Karl Alexander, Professor Emeritus in sociology at Johns Hopkins University, described a 25-year study during which researchers followed 800 first-grade students until they reached the age of 28. The work is described in a book, “The Long Shadow,” published in 2014. The title is a reference to the influence on a child’s later life exerted by the social and financial circumstances of the parents; it emphasizes the need to lift up the poor so they invest in their children, thus allowing the next generation to become productive members of society.

“Equal opportunity is a national myth,” Dr. Alexander said. “The life prospects of a child in America are more dependent on the income and education of his parents than in almost any other industrialized country in the world.”

He said the research revealed a remarkable difference between the life prospects of black children and white children. At age 28, for those in the study that did not go on to college, he said, 45 percent of white men were in skilled crafts, earning $20.34 an hour, while only 15 percent of black men of similar background were in the same kinds of jobs, earning only $14.75 an hour. He found that social contacts, including family, friends, and churches, were important in helping the participants find a first job, develop skills, and build up a work history. That assistance was much less available to black participants.

“It’s not a pretty picture,” he said. “Going forward, we all need to be proactive in trying to change the narrative.”Mr. Hoyer also emphasized the need to invest in children’s development, and he criticized Congress for cutting funding to help the poor. He said an increase in the minimum wage is needed. “Nobody can live on $7.50 an hour,” he said, noting that if the minimum wage had kept pace with inflation since it was first established in 1968, it would be at $10.60 an hour today. 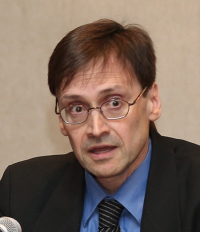 Arloc Sherman, Senior Fellow at the Center on Budget and Policy Issues, provided statistics showing the positive effect of many government programs to help the poor. He said Head Start, for example, improved the adult success of black children in the areas of education, health, employment, and crime, to the point where it almost eliminated the disadvantage that black children start with.

Court-ordered increases in school funding in the 1970s and 80s had a significant impact, he said. A 10-percent increase in public school spending over 12 years resulted in nearly half a year increase in completed education, 9.5 percent higher earnings, and a 6.8 percent decrease in adult poverty. The earned income tax credit of $3,000 to the parents resulted in 7.2 percent more of the children of those families finishing high school and in 4.8 percent more of them enrolling in college.

He said a program in Milwaukee called New Hope yielded academic gains equivalent to half the achievement gap between black and white kindergartners at a cost of $8,000 per family. It offered anyone under 1.5 times the poverty line a job of 30 hours or more a week and included wage supplements, licensed childcare, and health care.“What won’t work,” he said, “is deep cuts in social programs and turning the safety net into block grants,” referencing the budget bill approved by the U.S. House of Representatives on March 16. “That is not helpful.” 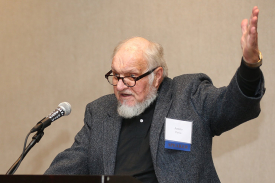 A number of the speakers focused on the problems of acute poverty, institutional racism, and lack of access to education or employment facing the African-American population of Baltimore. Antero Pietila, a Baltimore journalist, discussed the city’s transportation system, which he said is basically dysfunctional, as it does not provide the means for people without cars to either get to a job or to a place where they can get training or a higher education.

Mr.Pietila is the author of “Not in My Neighborhood: How Bigotry Shaped a Great American City,” which established him as an urban historian. In his book, Mr. Pietila explains how housing patterns have evolved in Baltimore City along racial and religious lines over the last 100 years. 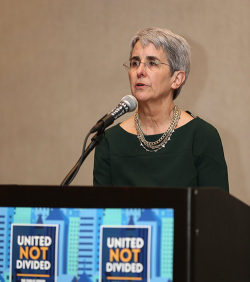 Margery Austin Turner, Senior Vice-President for Program and Planning Management of the Urban Institute, discussed the challenge of neighborhood segregation and its contribution to inequality. She argued that past policies and institutional practices confined poor blacks to a limited set of city neighborhoods and starved these neighborhoods of essential resources. “The historical record clearly demonstrates that our nation’s stark patterns of racial segregation, poverty concentration, and neighborhood distress were built by public policies and private actions,” she said. These policies, she continued, have excluded poor black families, especially those of color, from neighborhoods of opportunity and disinvested in the neighborhoods where poor people, especially those of color, were clustered. She argued for a next generation of “place conscious” policies that invest in the most urgent needs of distressed neighborhoods while also expanding access to affordable housing in opportunity-rich neighborhoods.

Michael Kelly, Executive Director of the Baltimore Metropolitan Council, said there are currently 1,800 families on the waiting list for housing in Baltimore. He outlined a number of initiatives under way in the greater Baltimore area to break up concentrations of poor people, provide public transportation systems that will take people to where the jobs are, and foster development that will provide more jobs. The task is made more difficult by the fact that the members of the Council don’t always agree on their priorities, he said.

Bridging the Inequality Gap: The Role of Military 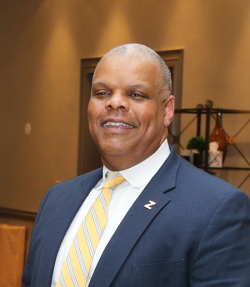 Rear Admiral Sinclair Harris explained the role of military in bringing young men and women way out of poverty with reference to his own family history. In the World War II era, military service provided men from economically disadvantaged backgrounds with an unprecedented opportunity to better their lives through education and on-the-job training. He described the past efforts to make the military more inclusive and noted that there are still very few minorities, especially minority women, in the top ranks.

Among to most notable reformers in the military is Admiral Elmo Zumwalt who was Chief of Naval Operations in the early 1970’s, Admiral Harris explained. Admiral Zumwalt has been called the father of the modern Navy for ending racial and gender discrimination and for easing demeaning rules. In the Fall of 2016, the new Navy warship that is named in honor of Admiral Zumwalt, will be commissioned in Baltimore.

The military remains the single largest employer of young men in the United States. It has benefitted minority men educationally to a greater extent than non-Hispanic whites, according to sociological research. In recent decades the over-representation of minorities in the military has declined leaving some scholars speculates that this due to a smaller and more technologically advanced military that has become more selective in admitting recruits. (Text: Maija Harkonen) 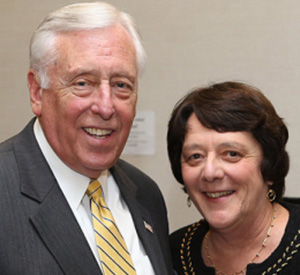 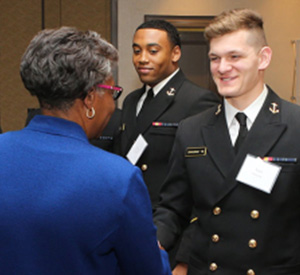 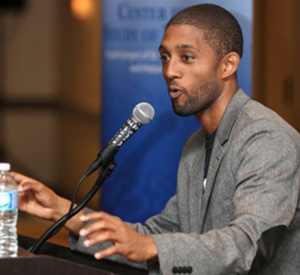 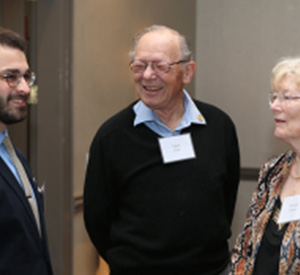 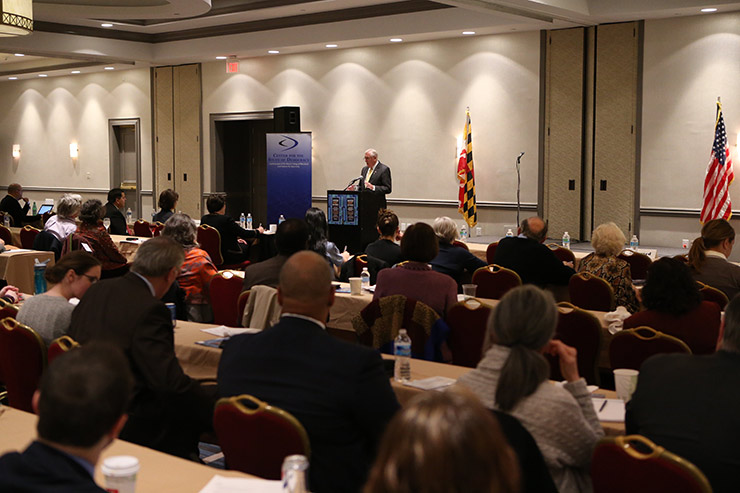